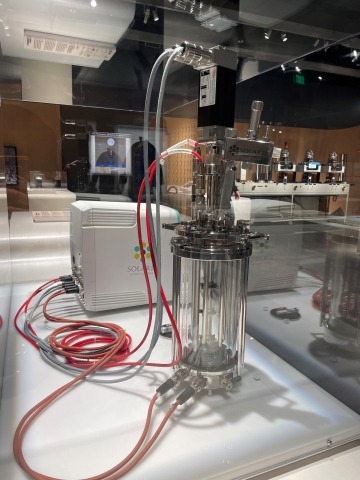 Boston (MA), United States, October 2, 2022 - Solaris Biotech is proud to announce that MIT (Massachusetts Institute of Technology) displays a Jupiter bioreactor loaned by Solaris in the new MIT Museum that just opened to the public on Oct. 2, 2022.

Solaris Biotech is a leading innovator and manufacturer of bioreactors, fermenters and tangential flow filtration systems that enable the technology to be used for a variety of applications in the pharmaceutical, biopharmaceutical and food industries.

Bioprocessing is a "base technology"

Matteo Brognoli, CEO of Solaris Biotech: "We at Solaris consider it a privilege to be part of the new exhibition of the MIT museum, a world excellence in the field of science and technology. Bioprocessing really can solve many problems that mankind is facing in the future and we testify our pride in being part of a mission-based, educational effort of this size. Sometimes people are afraid of cultivated cells and proteins, but they do not know that bioprocessing is the base of vaccines, many medicines, cosmetics, feed, fertilizers, even meat, honey and fish. The new MIT museum with its mission to bring science close to the public is a place to be for those who foster innovation for a more sustainable and healthy world.” 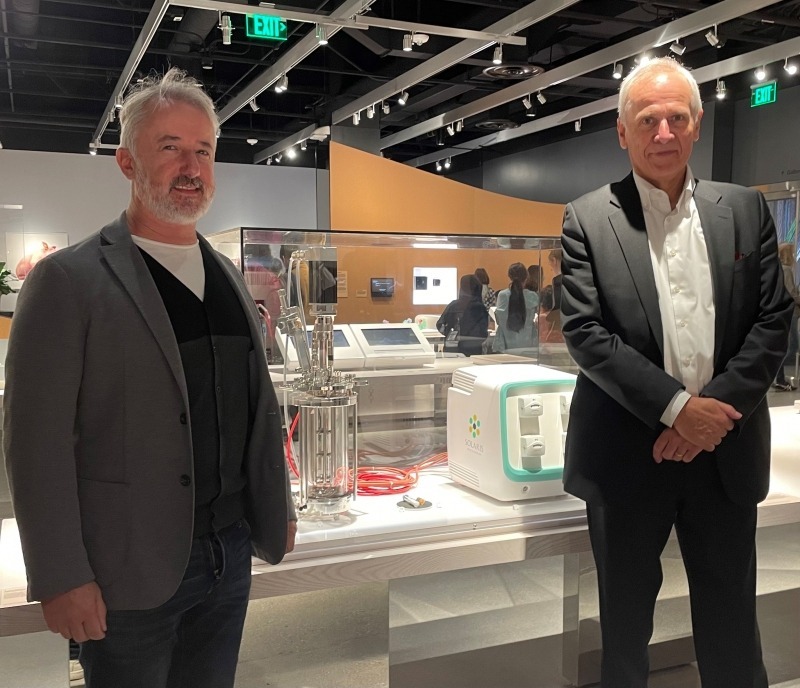 Details of the Exhibit at the MIT Museum

The MIT Museum's inauguration is showcasing a variety of research projects carried out my MIT and Harvard students, alumni, and startups. Circe's exhibit featured the Solaris Jupiter bioreactor as it was used in their project, along with the LEM_1 Process Control System.

The ability to engineer organisms to produce new proteins can offer timely solutions to our largest unresolved, problems. By encoding genes for unique enzymes into microbes, Marika Ziesack (CSO) and Shannon Nangle (CEO) of Circe Biscience have found a way to use the metabolic pathways of microbes to produce artificial fats and bioplastics.

This process couples fermentation technology and synthetic biology to bypass traditional supply chains, creating a production process that fixes atmospheric greenhouse gases into food ingredients. Using microbes to produce fats could provide a possible solution to the host of challenges raised by industrial animal farming. Paired with the growing industry of animal-free meat and dairy, their work could reshape the ways we “grow” our food.

They are using the same technology to make bioplastic products that not only remove climate-warming greenhouse gases from the atmosphere, but use less water and land than either petroluem-based plastics or plant-based bioplastics. This work could have huge impacts on the bioplastic industry and address the ever-growing concerns of climate change and the environmental impacts of traditional plastics.

“Large-scale carbon dioxide-driven fermentation is the way of the future. Like the replicator in Star Trek, we can program a host of products tailor made from simple, ubiquitous, raw materials.” -- Shannon Nangle, CEO, Circe Bioscience

This bench-top fermenter was essential in early rounds of experimentation needed to test the production capabilities of the genetically altered microbes. It helped the scientists find the right conditions for the microbes to produce bioplastic or artificial fats.

As the brains behind the fermenter, this system allowed the scientists to go through the rounds of experimentation needed to test the production capabilities of the genetically altered microbes and find the right conditions to produce bioplastic or artificial fats.

This sample of new bioplastic was produced by genetically engineered microbes. By pulling greenhouse gases out of the atmosphere to produce a range of bioplastics, these microbes provide solutions to two of humanity’s growing challenges.

Produced by genetically modified microbes, this fat sample is chemically identical to the fats found in cocoa butter and animal fat. These engineered fats provide a solution to the growing adverse effects of factory farming and represent the potential future of agriculture.

What's next for Solaris' education program?

Solaris, which became part of the Donaldson Group in November 2021, is cooperating with several universities in Italy and will support the Galileo Festival of Science in Padova on October 14, 2022. Matteo Brognoli will speak at a panel on cultivated proteins together with Justin Kolbek (Wild Type Foods), the nutritionist Lucilla Titta and the genetist Michele Morgante, professor at the University of Udine (Italy).