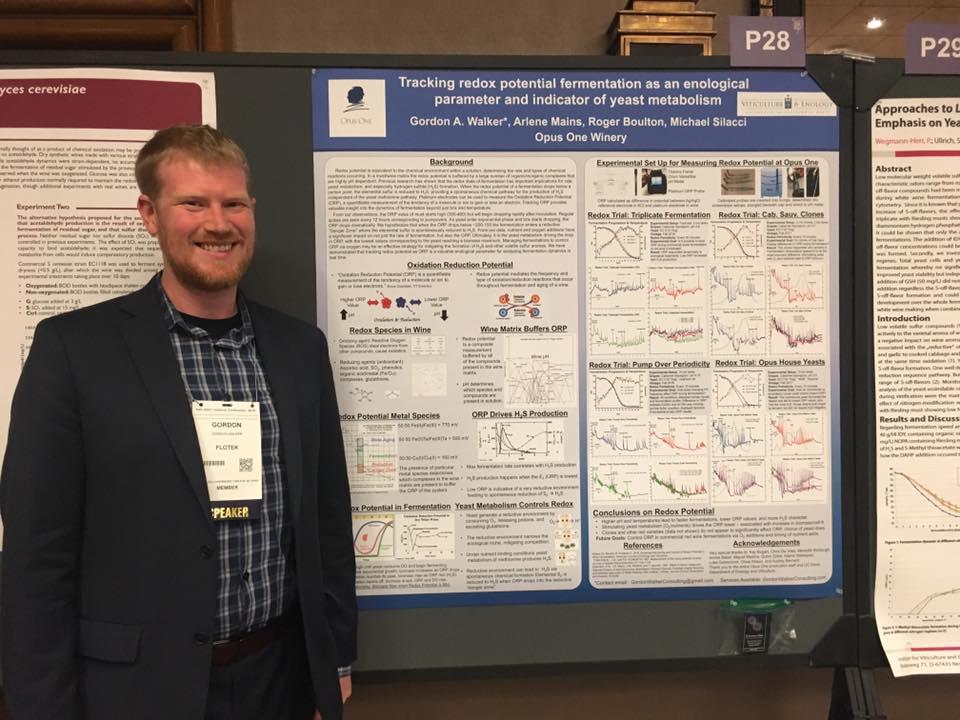 I did a post-doctoral research project at Opus One during harvest 2016 & 2017. Here is a recent article written by Ted Rieger of Wine Business Monthly. Ted and I talked after he saw my poster about tracing oxidation reduction potential (ORP) at ASEV 2018 in Monterey.

Opus One Winery in Napa Valley conducted a two-year research project in conjunction with UC Davis (UCD) to measure and monitor oxidation reduction potential (ORP) during red wine fermentations that proved to be an effective parameter to analyze fermentation dynamics. ORP is an effective indicator of yeast metabolism in fermentation and when it drops below a certain level, the fermentation enters a “reductive danger zone” where unwanted hydrogen sulfide (H2S) formation can occur. As a result of the research project, Opus One is moving forward with a goal to install ORP sensors to monitor and control the redox potential in all tank fermentations.

The study, “Tracking Redox Potential during Fermentation as an Enological Parameter and Indicator of Yeast Metabolism,” was presented as a research poster at the 2018 National Conference of the American Society for Enology and Viticulture (ASEV) in Monterey, California. Dr. Gordon Walker, a wine biochemist, microbiologist and industry consultant, was the researcher who worked at Opus One Winery for two harvests following completion of his Ph.D at the UCD Department of Viticulture & Enology. The study was done in cooperation with Opus One winemaker Michael Silacci, Opus One interns Arlene Mains and Chris de Vries, and UCD enology professor Dr. Roger Boulton. Walker said he was inspired to conduct the experiment by Boulton’s work and teachings in this area, who has long called ORP “a hidden variable in winemaking.”

Providing background, Silacci explained: “We did this study after years of conversations with Roger Boulton that date back to when I took classes at UCD in the 1980s. With Gordon’s work, we now have a good idea what level the ORP can drop to during fermentation to potentially produce H2S, and we can then push the ORP to a safer level through oxygen addition with a timely pumpover.”

Unwanted H2S levels that persist in wine are a concern as they can later bind with ethanol to produce mercaptans that are more difficult to remove, and can produce volatile sulfur aromas such as “onion,” “rubber” or “skunk.” Traditionally, wine is treated with copper additions to mitigate mercaptan issues, but as Silacci explained, “We don’t know what possible long-term impacts copper can have on wine during aging, so our goal is to eliminate the use of copper.”

Redox potential is a reflection of the chemical environment of a system. The oxidation reduction potential (ORP) is a quantifiable measurement of the tendency of a molecule or ion to gain or lose electrons, and a measurement of the redox state. ORP is a common measurement in biochemistry, environmental chemistry and water quality. In aqueous solutions, ORP can be determined by measuring the potential difference between an inert sensing electrode in contact with the solution and a stable reference electrode.

Walker and the researchers collected data during the 2016 and 2017 crush seasons at Opus One with fermentations of Cabernet Sauvignon in 2-ton stainless steel tanks. The tank setup used a Thermo Fisher Orion Versa Star pH meter (more commonly used for lab analyses) and platinum ORP probes. The calibrated probes were inserted into screen/pipe assemblies with the solution sensing electrode placed in fermenting must/wine below the cap within the tank and wired to the pH meter. ORP is measured in millivolts (mV). At Opus One, Walker said he saw ORP range from 400 mV to as low as 50 mV. The ORP value of must starts high, about 300 to 400 mV, but will begin to drop quickly with the onset of yeast activity and continues to drop as the yeast enter exponential growth. Walker found that when the ORP drops below about 200 mV, the fermentation enters a “reductive danger zone” where the elemental sulfur can be reduced to H2S. By tracking ORP, Walker said, “I could predict accurately when reduction would occur.” The Opus One winemaking staff confirmed that Walker’s ORP data accurately predicted reduction just before staff could begin smelling sulfur odors. The trials also demonstrated that higher pH and temperatures are associated with faster fermentations, leading to lower ORP values and more H2S character.

A separate study by Boulton, recently conducted at UCD with faculty colleagues David Killeen and Andre Knoesen of the UCD Department of Electrical and Computer Engineering, demonstrated the ability to monitor and control redox potential at a chosen value by adding air during red wine fermentations. This experiment showed the redox potential could be controlled at 215 mV, well above its natural level, throughout the fermentation. A research paper on this work, “Advanced Monitoring and Control of Redox Potential in Wine Fermentation,” was recently published in the American Journal of Enology and Viticulture.

In the Opus One study, the lowest ORP values corresponded to the yeast reaching a biomass maximum and ceasing growth. Yeast strains differ in their tendency to produce H2S, as a function of nitrogen requirements and how their metabolism drives the drop in ORP during fermentation. Opus One has identified and isolated five different “native” yeast strains from its estate that are desired for fermentations. Silacci believes they give Opus wines “a deeper expression of place.” Silacci said, “Our goal for fermentation is to use 80 percent wild yeasts and 20 percent commercial yeast using PDM.” The winery hopes to collect more data to correlate ORP values with yeast strains and grape sources. Walker has sequenced the genomes of these yeast strains with the goal of understanding their origins and contributions to quality.

For the 2018 crush, Opus One is installing Hamilton industrial process ORP sensor probes through ports in the pumpover hard lines on four stainless steel fermenters—on two 10-ton tanks and on two 20-ton tanks. These EasyFerm Plus ORP Arc 120 sensors, manufactured by Hamilton Company Inc. based in Reno, Nevada, come with accessories for wireless real-time data monitoring. The sensors are designed for demanding applications in pharmaceutical and chemical industries. Walker, in addition to his consulting work, now serves as a sales rep with Flotek, based in Walnut Creek, CA, that represents Hamilton sensors and other products for food, beverage and chemical process applications.

Opus is working with Acrolon Technologies of Sonoma, CA, producer of TankNET controls, to integrate the ORP sensors into overall tank control, monitoring and data management, that includes temperature control, Brix measurements and automatic pumpover scheduling and control. Tank pumpovers can also be controlled by a portable tablet device used by cellar workers. Opus One employee Mains said, ”Timing of oxygen addition is important, and having real-time data allows us to determine the time points that are most critical.” Assuming successful results for the 2018 crush, Silacci said, “Our goal is to put these ORP probes and systems on all of our tanks for 2019.”

Opus also purchased a Hamilton EasyFerm Plus ORP Arc 425 sensor, a longer probe (425 mm) that will be used to take ORP readings of wine aging in individual barrels by manually inserting the probe through the bunghole during topping operations. Little is known about ORP during barrel aging and it has not been studied extensively. Mains said, “The barrel monitoring is exploratory and will be more for fact finding at this point to see if the ORP values we measure correlate to certain conditions or change over time.”

Walker summarized, “ORP is a powerful predictive parameter for fermentation, and winemakers should definitely consider tracking this “hidden variable” in their fermentations. Tracking ORP is a great way to help winemakers understand what is happening in wine fermentations beyond just Brix and temperature.”