Cellular Agriculture: Plant and Animal Products Produced in the Lab! 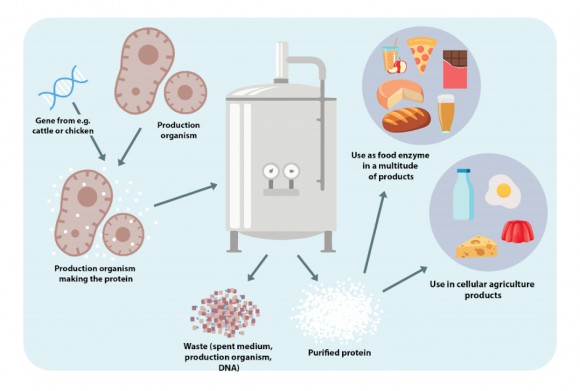 The idea of cellular agriculture is not a new one. We have been using recombinant DNA technologies for decades to produce valuable proteins and biomolecules for human use. It is common place for yeast and bacteria to be used into the production of essential enzymes like amylases, pectinases, lipases, and chymosin. We have even programmed microbes to produce insulin, providing a much humane and economical source for this essential peptide.

What is new, are the pioneering companies in the Bay Area working to make a wide variety of animal products through genetic engineering of microbes. Given the long history of GRAS products produced by cellular agriculture, the precedent is set to bring actual food items to the market. Companies such as Clara Foods are trying to recapitulate egg products produced by fungi; or Perfect Day Foods which is making a range of dairy proteins also in Fungi. There is also Memphis Meats, which aims to provide affordable and delicious lab grown meat as an alternative to unsustainable agricultural practices.

There is tremendous potential in this industry. Climate change is coming and will certainly affect food security world wide. Cellular agriculture is a necessary solution to the problems of scale humanity faces in it's future. The work being done today in labs, will translate into the foods of tomorrow. Regardless of the organism being grown, bioreactors and cellular growth vessels are an integral part of this revolution. Whether it is at the 2L R&D scale in the lab, or at the 30,000L scale in a production plant; bioreactors facilitate the cultivation of our favorite microbes. Solaris is perfectly positioned to help supply the equipment necessary for innovation. Please see our full range of products: https://solarisbiotechusa.com

Cellular agriculture entails the production of genuine animal products without requiring animal breeding, rearing, and slaughter: in other words, farming cells or proteins directly rather than obtaining them from entire animals. The motivation for this approach is to address the enormous public health, animal welfare, and sustainability issues associated with industrial animal agriculture. Cellular agriculture offers an alternative production method that ameliorates all of the issues above while still delivering to the consumer a product that tastes and performs identically to the animal product it seeks to displace.

One product of cellular agriculture is clean meat, genuine meat grown by cultivating animal muscle cells. While large-scale (upwards of 20,000 L reactor volume) animal cell culture has been utilized for decades to manufacture materials for biological research and medical therapies, food is a relatively new application for animal cell culture. This paper will not focus on clean meat but will instead cover other products of cellular agriculture where the protein — rather than the cell — is the relevant functional unit. Examples of such cellular agriculture products include animal-free dairy products, eggs, and gelatin. These products are made using methods that, while also originally deployed in the biomedical field, have been used extensively for many decades in the food industry as well. Cellular agriculture products represent a novel but logical extension of a well established production platform to produce genuine animal proteins and products.

Rather than breeding and feeding animals, cellular agriculture uses large-scale fermentation1 to produce the main protein components of the respective animal products. These proteins impart specific functional and sensory properties to products like milk and egg white, and recapitulating their full suite of functional properties has thus far been difficult using other ingredients such as plant-derived proteins. Alternative ingredients from plants or algae work quite well for applications that only require one or a few functional properties. For example, the binding properties of egg can be mimicked by some gums while egg’s coloring properties are mimicked by pigments like carotenoids, but these alternatives cannot be used interchangeably when both properties are required; furthermore, neither of these alternatives deliver the protein content of egg. Thus, cellular agriculture offers the promise of animal-free proteins that perform identically to their animal-derived counterparts across their entire functional and nutritional repertoire.

Depending on the desired application, these valuable functional proteins can be combined with plant-derived nutrients like fats and sugars to yield a product that is closer to the original animal product than any fully plant-based product. While these products will not be identical to the animal-derived product down to the molecular level, they recapitulate the relevant functional properties of the animal product (for example, the melting and stretching of cheese or the binding and emulsifying properties of egg). At the same time, this cleaner, more efficient production process removes undesirable components of animal products like lactose, antibodies, Salmonella, and pus, which will not be present in products made through cellular agriculture.

The method of producing desirable proteins through fermentation has been used to make not only biomedical products like insulin but also food enzymes (a class of proteins) for decades. According to Novozymes, a global market leader in enzyme production, five billion consumers – nearly the entire global population – used or consumed a product made with their enzymes at least once a week in 20162 (see section 4). This is due to the fact that enzymes are not only used in all kinds of foods and beverages, but also in countless consumer products such as textiles, leather, paper, dietary supplements, personal care products, cosmetics, and detergents3.

To date, at least 99 generally recognized as safe (GRAS) applications for food enzymes have been answered by the FDA with a “no questions” letter, meaning that the agency does not see reason to question the safety of the enzyme based on the scientific evidence provided.6 Eleven enzyme classes from 160 sources for over 300 applications of food enzymes are permitted in Canada7 and over 300 applications have been received by the European Commission in order to establish a similar list8. Moreover, the market for food enzymes is expected to grow to 2.3 billion USD in 20209. Although fermentation-produced proteins are ubiquitous in our everyday lives and food enzymes have been part of our diet for decades, the average consumer knows relatively little about the technology behind them.